This past week has been busy sewing-wise with my first ever attempt at sewing a dress for myself!! I have been filled with mixed feelings of excitement and sheer frustration. Some of you may remember my last attempt at sewing a dress for a teddy bear almost ended in tears...if you don't, come and read about it here. I did not start this project feeling very confident... 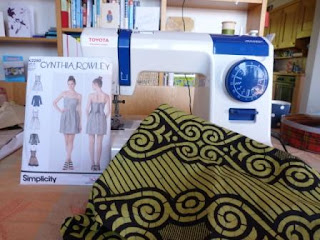 I came back from my four months working tour of Africa with yards of beautiful waxed fabric. The fabric had been sitting in a cupboard for over a year now, waiting for a special sewing project to come along. I love the fabric so much that it almost pains me to cut it, so I wanted to make something special with it. The problem is that no special project ever came along (I never looked and it wasn't going to appear out of nowhere) and I felt bad everytime I opened the cupboard to see tens of yards of fabric unused. So I bit the bullet and decided to actually make something with some of it. 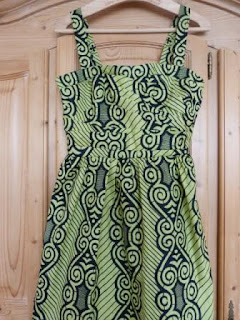 Knowing my limited sewing abilities, I had in mind a simple skirt with an elastic band waist. I had a pattern for such a project but it required stretchy material which this African fabric clearly isn't. My neighbour (and sewing tutor) Heather had just the right project. She had bought the August issue of Sew magasine in the UK and it came with a Simplicity pattern by designer Cynthia Rowley. She was confident I could make the dress despite my slightly worried face when I opened the pattern and realised I could not understand a word of it. I mean it was written in English but none of the terms made sense to me. At least, there were drawings... 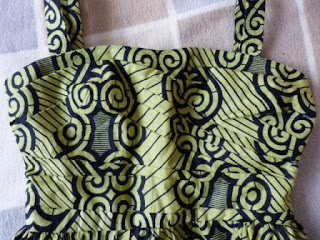 It turned out that the dress was a lot more complicated than I had hoped my first big project to be...This meant that it took me a while to complete it (probably 12 hours) but that I learned a lot of techniques. The bodice is made up of darts (above) and I had to gather and pleat the skirt top (below). 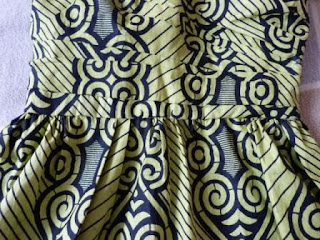 The bodice was by far the most complicated item to make, especially since it is lined on the inside (which I must admit does look nice). 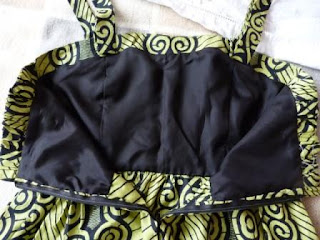 Two new techniques for me were inserting the invisible zip and sewing an elastic into the back casing. 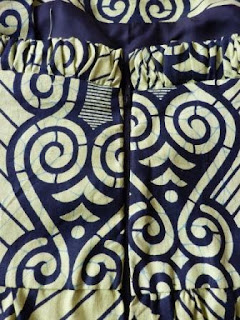 The dress turned out much better than I could have hoped and I am very pleased with it. I also feel more confident in tackling intermediate sewing projects now. I would like to say that it was fun to make but I found it a bit tedious, mostly because the pattern was so hard to understand and I lost a lot of time wondering what the next step should be...
So here it is, one last time because I am quite proud of my little achievement! 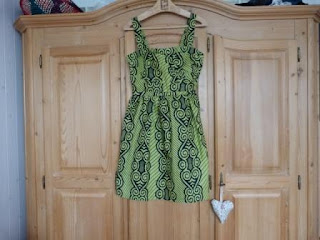 Go and check out on Handmade Monday what other crafty bloggers have been up to!
Posted by Made in Suisse at 08:00

I think it looks lovely - love the fabric as well x

Oh my word. If I ever dragged myself to make THAT, I'd be calling myself an expert!!! And it took you only 12 hours? It'd probably take me 12 days. Or weeks. Or months...

The dress is so pretty love the colours.

Well done - it looks gorgeous. Love the colours too - my favourites.

That is absolutely super and it is lines as well. You should be thrilled skinny with such a lovely frock... I can see many more to come.

I think you should be very proud of this! what a great job!

You should be justifiably proud of yourself. This is gorgeous. Give yourself a big clap. Off to resad the teddy bear tale now. Hugs mrs A.

Oh my, that is gorgeous! well done!! I love the fabric too. You should be very proud :o)

My first reaction was - a fitted dress, wow thats a hard one to start on. But you have managed it really well. The fabric looks great on it. I hope it hasn't put you off as you should be really, really proud!

Fantastic, gorgeous material, you should wear it with pride! x

Your dress is amaxing - how do you follow this as a first go! Love the fabric.
Jo x

Wow this is amazing I can't believe you made it by hand!! You should be exceptionally proud of yourself, I can't even sew up a hole in a pair of trousers so I am very envious of you!! Congratulations, wear it with pride! xx