Good morning everyone,
I hope everyone enjoyed the first instalment of my African chronicles (click here if you have missed it). A week after my unplanned trip to Morogoro hospital with amoebic dissentry (and very much still feeling under the weather), we had the opportunity to hire a car and a driver for the weekend (I am not enough of a dare devil to drive myself around in Africa!). I was torn...on the one hand I knew that being more than 50 meters away from a bathroom at any time could prove to be a dramatic experience if another dissentry episode came along...on the other hand, a weekend in Mikumi National Park a few hours down the road from where we were was too good an opportunity to miss. I had always dreamed to go on a safari! Although I had some wonderful wildlife encounters in Ethiopia, I had never seen one of the Big 5s (the lion, buffalo, elephant, leopard and rhino).
So we set off one Saturday morning with massive grins on our faces and enough Imodium to constipate a whole infantry company (and provide me with peace of mind if not happy bowels). The Mikumi National Park covers an area of 3230 km², making it the fourth largest in the country. The park is crossed by the Tanzania A-7 highway. The uncontrollable excitement started while driving on this highway (and well before actually arriving in the National Park) when we started to spot herds of elephants and giraffes grazing on the side of the road!
The lanscape of Mikumi NP is quite similar to the one of the much bigger and popular Serengeti NP. Less visited by tourists (which has to be a good thing when it comes to its environmental protection), the park harbours many of the species characteristic of the African savannah such as...
... the wildebeest... 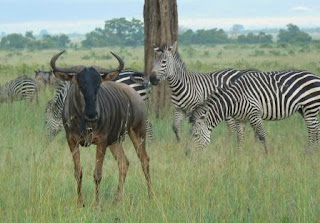 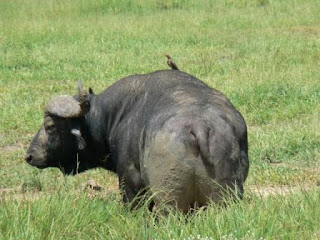 ... the giraffe...
... and various species of antelopes such as impalas 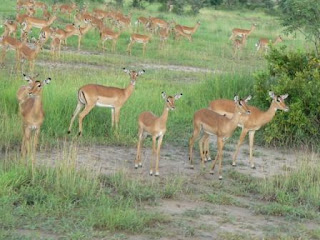 The savannah is dotted with majestic baobab trees... 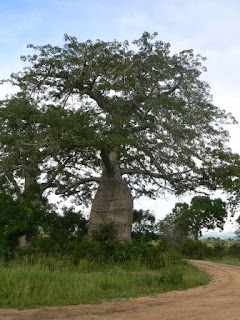 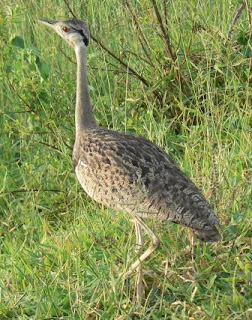 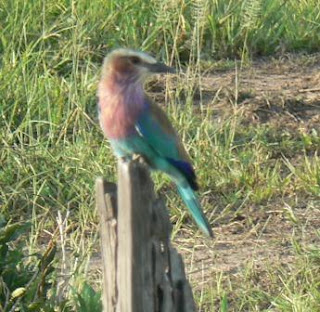 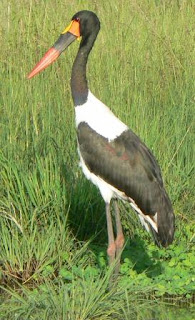 We arrived on Saturday afternoon and spent a couple of hours driving around the park. We first went to see the hippo pool. I was a bit weary of hippos after an encounter with one in Ethiopia on a lake where it almost overturned a terrified fisherman's boat, but these seemed to be fully occupied taking their afternoon nap. 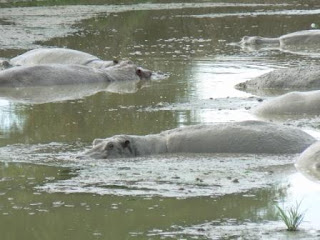 Looking more closely in the water, I realised I was surrounded by crocs (little ones yes, but still with enough teeth to turn you into a kebab) so I quickly took a couple of pics and ran back to the car. 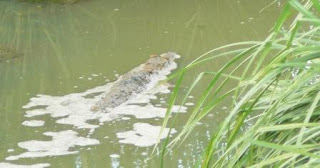 Traffic was occasionally slowed down by elephants crossing the road and taking their time (or charging us...good thing I had taken some Imodium as this was quite a terrifying moment!). No traffic jam though, we only saw one another car in the 2 days we were there! It was great not to have that safari feeling of being 12 cars surrounding one lion with everyone fighting to get the best view/picture.

We eventually drove back to the park headquarters and enjoyed a drink on the terrace of the restaurant. What a way to enjoy an evening drink! 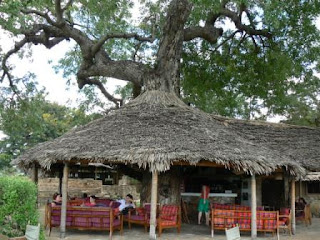 And what a view! There is water hole not very far from the restaurant and you can enjoy your evening meal while watching the buffalos and elephants drink at the water hole. 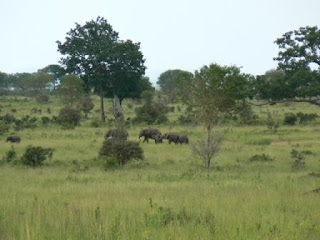 And this is when it happened: the curious incident of the elephant in the night time. The restaurant was 2 minutes walk from our hut. After dark though, the park insists on you taking an armed guard to walk you back to your sleeping quarter. My colleague and some people we were travelling with had decided to stay for another beer, so I went home with an armed guy and a hand torch. We were happily walking along, 20 meters maybe from my front door, when the guard suddenly stopped. He swept his torch in front of us and we found ourselves less than 5 meters away from a big bull elephant. How did we not hear him?? It is incredible that such enormous creatures are as quiet as mice. Thankfully, the bull just walked away trumpetting to voice his annoyance of being disturbed in the middle of the night. I was gob-smacked!
The following morning, we rose at 5am to set off on another drive before the sun rises. Early mornings and late afternoons are when the animals (and us Northern Europeans travelling in Africa) are most active.
﻿
﻿

Dawn is also a great time to take pictures because of the good light conditions and because you get to catch half-sleepy animals getting up to get on with their daily business like this herd of elephants. 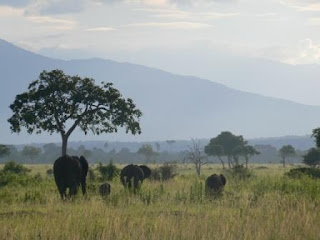 We drove to the more marshy parts of the park where we took part in a Bataille Royale with tse-tse flies in the car. We were driving with our window opens until we realised that we were being eaten alive by tse tse flies (painful bites). We closed the window but had to track and kill every single fly that had flewn in.
Despite the flies, the ponds and marshes were beautiful and proved to be a great  photo background. 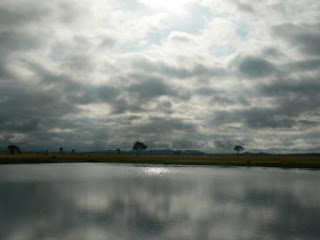 Driving around that morning we spotted the usual suspects... 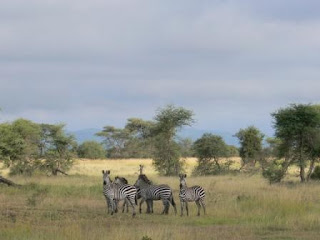 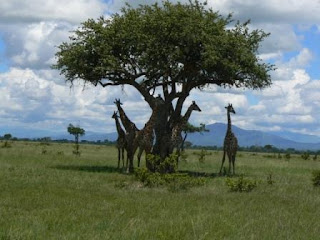 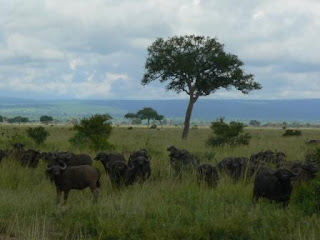 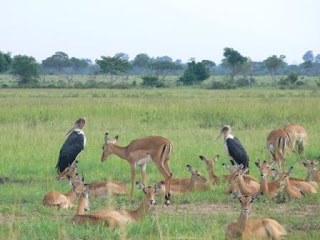 ... as well as a couple of species we hadn't seen the previous day such as baboons 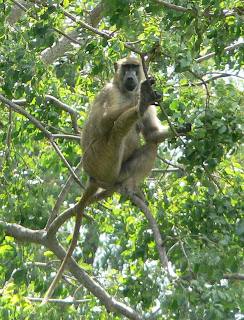 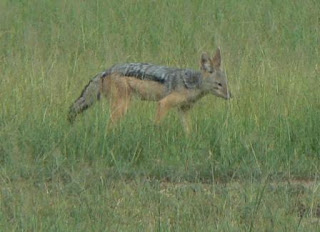 However, we still hadn't seen a lion!!! More difficult to spot than some of the other species, we had looked very hard for them. Mikumi NP does not have a big lion population like the Serengeti NP for example, but we knew they were there. Although every single second of that safari so far had been fantastic, we felt deep down that we would be sorely disappointed if we got back home without seeing a lion. Finally, at 2pm we had to start the journey back to the university and started driving to the entrance of the park. And then we saw a lion tree! 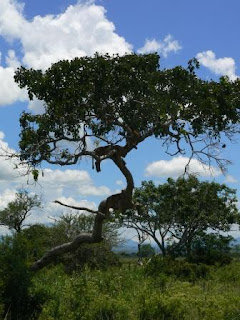 The Mikumi lions exhibit a behaviour which is not widely seen in other lion species. They climb trees! And there, in front of us, we had 3 big lion cubs having a snooze in the midday sun while their mum was lying in the grass at the bottom of the tree keeping an eye on them. 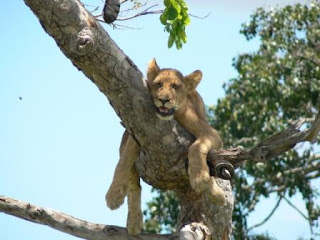 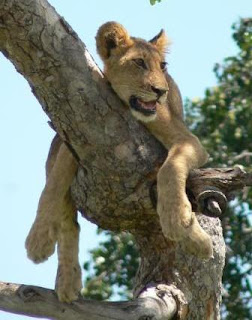 These 3 lion cubs and their mum proved to be the perfect ending to a fabulous weekend. What a feeling to almost have a national park to yourself and to sip your evening drink while watching elephants play in the water!
We went back to the university for our second week of teaching after which we were going to move to Dar es Salaam for another 2 weeks of teaching. Upon reaching Dar es Salaam, I had to go to hospital again after experiencing very bad burns in my stomach. Upon examination, it turned out that taking my malaria medication on an empty stomach for 10 days (I still wasn't fully recovered from the dissentry by then and could not eat much) was a bad idea and I now had a big stomach ulcer. Anti-malarials are powerful drugs and they can do a lot of damage if not taken with food. It would be another 2 weeks until my ulcer started to heal and I could eat a proper meal.
Join me next on my Easter holiday weekend trip to Zanzibar!
Posted by Made in Suisse at 08:00

Oh wow what an experience!! I would love to do that one day! Can't believe you nearly walked into the elephant lol. ;)

the picture of the lion in the three is just hilarious !